Rumors abound on social media that the fate of the Baxter House has been sealed and that it is slated for demolition. While that may make for a good story, according to a statement released by the Village of Baxter Estates, that is definitely not the case. 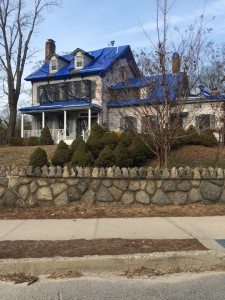 According to an artist’s rendering predating the original building of the structure in 1673, it appears that a Native American wigwam village was located at the site. The Baxter family moved into the home at 15 Shore Rd. in the 1740s. The house was used as lodging for Hessian troops that were engaged by the British during the Revolutionary War. The Baxter’s retained ownership until the late 1800s and in 1895, the parlor of the Baxter House became Port Washington’s first library. It is easy to see the emotional pull that this home has due to it’s historical significance.
The home has passed through many hands throughout the years, each making their own modifications as needed. In the early 2000s the home was purchased by Sabrina Wu, with her intention of maintaining residency there. Village Landmark status was granted in 2005. It was later converted into three illegal dwellings and went through some changes to the exterior that were not within the landmark guidelines.
The Village of Baxter Estates Board wishes the homeowner to adhere to all relevant procedures and to the law regarding any exterior changes to the dwelling. However, changes to the interior of the home are not within the village’s jurisdiction. Since the Baxter House is a private residence, the contents and configuration of its interior are solely the owner’s. Wu has now retained an architect and has submitted blue prints depicting details to the existing home at her own cost. Her attorney has advised the village that drawings for the proposed building should be submitted within two weeks and from there a formal application to the Landmarks Commission will be made.
The Landmark Commission is responsible for approving the exterior of the building. It consists of five individuals, one being the Village Historian Steve Howley, and Chairman Dr. Peter Salins. Salins is a licensed and registered architect and was a professor of urban planning at Hunter College, specializing in historic preservation. He also served as editor of The Journal of the American Planning Association. Wu was advised to keep the exterior exactly as it is today and use materials consistent with what was used when the homestead was originally built.
The village’s intention is similar to the Philadelphia neighborhood of Society Hill that underwent a beautification project during the mid-twentieth century. At a time when older buildings were being razed in order to make way for sky-risers and more modern architecture, preservation of history was at the heart of this project. Dilapidated and neglected buildings dating back to before the Revolutionary War were restored with modern conveniences. The end result are gorgeous buildings with profound historical significance.
Although Landmark Commission meetings are not usually open to the public, the village will place a public notice and invite those interested in the outcome of the historic landmark to attend.
After the plans are approved, the Village of Baxter Estates will schedule a public meeting and give notice to village residents in order for them to view Wu’s proposal. Wu has recently appealed two outstanding Orders to Remedy which were issued by the village.