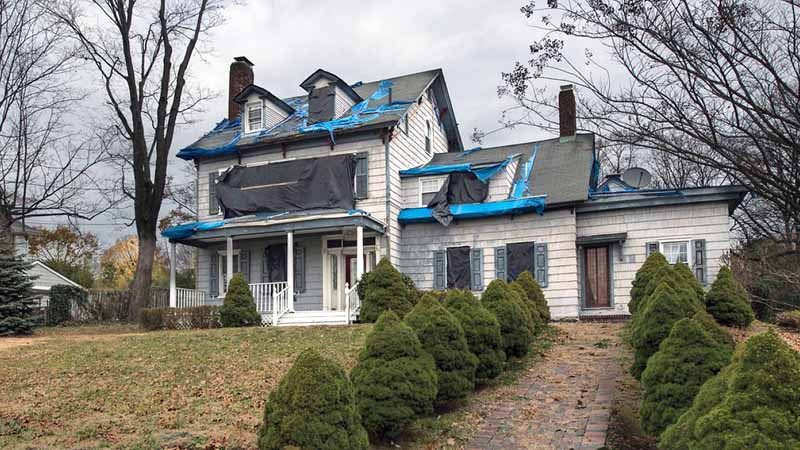 The owner of the Baxter House, Sabrina Wu, has submitted plans to the Village of Baxter Estates Landmarks Commission, a large crowd learned on the evening of Jan. 5 at the monthly village board meeting. According to village attorney Chris Prior, the plans include demolishing and then a complete rebuild of the property.

Wu, who has claimed that her destitution is why the property is laying in disrepair, has opted for a more costly solution to her problem, contradicting her past statements. According to village landmark laws, the home must be rebuilt as an exact replica using materials from the time period of the original build (17th century, in this case). The village trustees recently toured the interior of the home and stated that there is only minor damage.

The building department of the village recently issued another violation to Wu for the tarps covering Baxter House from the elements, ripping and littering surrounding areas, including Baxter’s Pond. This property is so well-loved by the community that neighbors help pick up trash from the property and try to restore some dignity to it.

There were a few individuals who spoke up and showed sympathy to Wu. Jim Sacrestano believes that “the house was taken away from her with the Landmark Law.”

Twenty-nine concerned citizens recently met at Landmark on Main Street to draft a letter to Mayor Nora Haagenson and the rest of the village board. In the letter, they state their wish “that the Baxter House be restored under the Landmark Law.” They also attached two photographs showing the neglect and deterioration of the home in one year.

The letter also indicates that the citizens would like for the “village to pursue litigation of the citations against the owner. The goal of such litigation is to keep the exterior of the house in good shape and keep the responsibility for the upkeep of the exterior of the house on the owner.” The citizens also stated that they pledge to help to raise money, as part of the Landmark Law, to help the village fund litigation against the owner due to their love of the home. The citizens also brought up that other residents of the village have been issued violations for lesser grievances and that they are looking for Wu to be treated the same way.
Trustee Alice Peckelis commented that “all of us on the board are not about the way things have progressed.”

Haagenson said that it is “gratifiying to see a large group interested in the Baxter House,” but could not comment much more than that due to the village attorney prior advising them that this issue is out of their hands and the Landmarks Commission is now in control of it.

A public meeting of the Landmarks Commission will most likely be scheduled for the second week in February and it is there that the fate of the Baxter House will be decided.