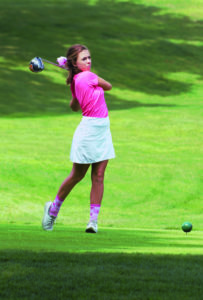 Brittany Ferrante, director of Junior Golf at the Village Club at Sands Point, has raised more than $50,000 for the American Cancer Society since performing a thirteen-hour golf marathon last month.

She represented the club’s Babes Against Cancer Committee, and is the first woman to do a golf marathon charity event in the PGA Metropolitan section. Babes Against Cancer is a partner of the American Cancer Society with participants in 30 country clubs around the New York Metro area.

“We did our own ‘Baby Babe’ tournament on a Tuesday where our members raised $15,000,” Ferrante said. “On top of that I was asked to do a golf marathon so I did that by myself on Monday, the 14th, and played as many holes as I could from sunrise to sunset.”

She teed off at 6:20 a.m. and played until 7:15 p.m. Fellow club members and other supporters pledged to donate a certain amount of money for every hole while others donated a flat amount. Before teeing off that morning, she had already raised $7,000 and $169 was pledged for every hole played. Ferrante originally set a goal of playing 100 holes but met that goal in just six and a half hours. She went on to play 200 holes, beating the previous one-day record of 151.

Many women in her family have fought breast cancer she said, including both of her grandmothers and several of her aunts. In a video from the Village Club at Sands Point’s Facebook page, you can see Ferrante’s final putt of the day. She begins to tear up before walking towards her dad and giving him a hug.

“My dad was standing in the back and I just wanted to hug him because I never got to meet his mom,” Ferrante said. “I knew that this was very special for him.”

According to Ferrante, when a representative from the American Cancer Society heard how much she had raised, the representative began to cry. She told Ferrante that donations have been low this year.

“It felt really good that even during a time of uncertainty, my members came together and they were able to donate a lot of this money,” Ferrante said. “It’s going to a great cause and I would do it all over again like tomorrow.”

Donations can still be made on Babes Against Cancer’s website (acsedli.ejoinme.org), under the Brittany’s Gold Marathon tab.

-Cody Sullivan is a contributing writer for Anton Media Group