The America’s Cup World Series (ACWS) is coming to New York City on May 6 to 8. Six teams, including the cup defender Oracle, will compete. These races are leading up to the 35th America’s Cup in Bermuda in 2017. In early March, Oracle Team USA was the first team to capsize in the run-up to the America’s Cup 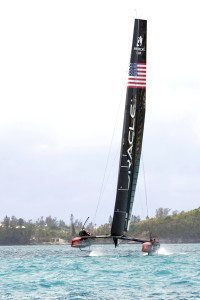 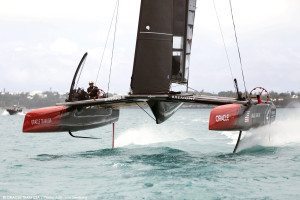 On Wednesday, March 2, Oracle Team USA, training in Bermuda on the team’s development boat, was sailing in 20 knots of wind and fell over sideways, rather than the usual nosedive of the AC72s. This boat, the AC45S, was largely undamaged with some electronic damage in the port hull being the principal issue. There were no injuries to the team. Following a crew rotation, helmsman Tom Slingsby had only been on the boat a few minutes before the mishap occurred. Despite this being a best-case scenario capsize with no injuries, it was still a traumatic experience. One wonders how it could not be traumatic considering the size of the boat, its design (multihull) and the speed the boat was going in 20 knots of wind. To hear Tom Slingsby and grinder Cooper Dressler talk through the aftermath of the team’s capsize during the training in Bermuda, go
to www.youtu.be/q7F8H1oyp70.

Nearly two dozen yacht clubs from across the country have requested an invitation to the 2016 Resolute Cup, a Corinthian Championship for U.S. Yacht Clubs. The regatta, which is an evolution of the U.S. Qualifying Series for the Rolex New York Yacht Club Invitational Cup (USQS), will be held Sept. 12 to 17, out of the New York Yacht Club Harbor Court in Newport, RI.

The 2016 Resolute Cup is a biennial invitational fleet racing regatta to be sailed in one-design keel boats (Sonar and Melges 20). The primary goal is to run a Corinthian keelboat championship amongst preeminent U.S. yacht clubs. The Resolute Cup will also serve as the only path for a U.S. yacht club to receive an invitation to the 2017 Rolex NYYC Invitational Cup to be held in Swan 42s. Teams will sail a qualifying series in both Sonars and Melges 20s, with the top teams moving to the Championship Series in Melges 20s and the remaining teams competing in the silver fleet in Sonars.

Among the clubs requesting invitations are some of the most well known yacht clubs in the country, including Eastern Yacht Club in Marblehead, MA, which won the inaugural USQS in 2010, and New York’s Larchmont Yacht Club, which won in 2012.

It is very exciting to announce that the Sea Cliff Yacht Club has signed up to test their mettle at the Resolute Cup. The club describes itself as a “small family yacht club on Long Island’s North Shore; home to 150 family members.” While the club is no stranger to large events, having organized the Around Long Island Race since 1977, its membership is less than one-tenth that of clubs such as Chicago Yacht Club or St. Francis Yacht Club in San Francisco, both of which have also requested invitations. But it takes just a handful of talented sailors to win the Resolute Cup—teams are comprised of three or four club members—and Sea Cliff is off to a strong start with team captain Doug Wefer, a four-time collegiate All-American for the University of Michigan and an accomplished match-racing crew.

“This struck me as an opportunity to have the club really get behind a major sailing accomplishment,” says Wefer, an insurance broker specializing in rare and antique musical instruments. “It would be a real honor to participate.” Wefer grew ups sailing on Manhasset Bay and is a product of the Port Washington Yacht Club (PWYC) junior sailing program. Invitations for the event will be issued in early 2016. “We’re extremely pleased with the number and diversity of the requests thus far,” said Resolute Cup event chair Patricia O’Donnell. “We have received interest from clubs on the Atlantic, Pacific and Gulf Coasts as well as a handful of freshwater clubs. We anticipate a very competitive fleet gathering in Newport next September.” Good luck to Wefer and Sea Cliff Yacht Club.

Nautical history is always fascination. Take for instance, the news coming out of England: The wreck of a 600-year-old warship that helped Henry V wage war on France is believed to have been found buried in a river. The Holigost—or Holy Ghost—was one of four “great ships” commissioned by the king in his war against France. It was spotted in an aerial photograph by historian Dr. Ian Friel in an area of Hampshire’s River Hamble described as a medieval breaker’s yard. Historic England said it was a “tangible link” to Henry V. The Holigost fought in sea battles during the Hundred Years War, which broke the French naval power. Friel identified the wreck when he was revisiting documentary evidence for a book on Henry’s navy. Future scientific research on the ship, which could include sonar and aerial imaging using drones, could reveal much about 15th Century shipbuilding and improve understanding of life aboard ship, naval warfare of the time, dock building and docking practices.