It may sound crazy, but sometimes when the weather is inclement, sailors fare the best. While everyone on land scurried to get out of the rain, a very different story played out on the Long Island Sound. The Port Washington Yacht Club (PWYC) Annual Day Race started just before noon on Saturday, June 4, which coincided with the start of pouring rain. You couldn’t see the horizon, the Connecticut or Long Island shores. The Throgs Neck Bridge, which was visible only minutes before, had totally disappeared from view. The rain was that heavy. Did the Race Committee abandon the race? Not at all. Sailors are used to racing in all kinds of weather and come prepared. While Mother Nature was probably enjoying her sadistic perfect timing, our racers took it all in stride. The distance race was completed in the outer bay and teams arrived back at the club with stories to tell and a ravenous appetite. There is something about being on the water in a downpour, getting absolutely drenched, that makes us really, really hungry. That’s always a good thing at Port Washington YC, because the BBQ was huge (lots of options) and delicious. Once everyone had time to eat and enjoy each other’s company, Commodore Howard Curd and Day Race PRO, Tom Egan, presented the awards. The 2016 results: PHRF Division: 1. Avalanche, Farr 395, Craig Albrecht; 2. Speed D8, Evelyn 32-2, Chuck McCarthy; and 3. Tenebrae, J124, William Ingraham. PHRF Non-Spinnaker: 1. Rita, Hunter 35.5, Arthur Sa; and 2. Impulse, O’Day 39, Len Di Iorio. 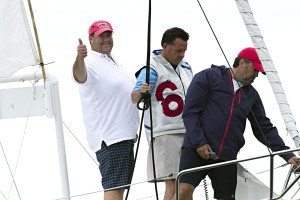 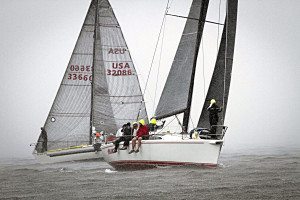 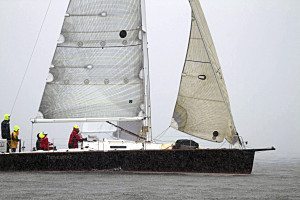 The PWYC Day Race is the first race in the Western Long Island Sound Triple Crown. The other two events are: City Island Yacht Club Annual Day Race, Sunday, Aug. 14; and Douglaston Yacht Squadron, Captain Island Race, Saturday, Sept. 10. To be eligible for the perpetual trophy, boats need to complete all three races in the series.

Every other year about this time, the Newport to Bermuda racers are gearing up for this iconic race. This 635-mile biennial race is the oldest regularly scheduled ocean race, one of very few international distance races, and (with the Transpac Race) one of just two of the world’s regularly scheduled races held almost entirely out of sight of land. Founded in 1906, the Bermuda Race is held for the 50th time in 2016. Its purpose was stated in 1923 by Cruising Club of America Commodore Herbert L. Stone: “In order to encourage the designing, building, and sailing of small seaworthy yachts, to make popular cruising upon deep water, and to develop in the amateur sailor a love of true seamanship, and to give opportunity to become proficient in the art of navigation….”

This year’s event is expected to be the third largest in the race’s history, with approximately 190 boats. The race attracts sailors from across North America and the globe, with recent entries from Russia, Britain and China, and always a large turnout of Canadians. The 2016 fleet is extremely diverse. A total of 23 countries are represented among the sailors, and 55 of the boats have at least one sailor from outside the United States. In addition, 41 U.S. states are represented in this fleet.

The Newport to Bermuda race is so demanding that the rules state, “The Newport Bermuda Race is not a race for novices.” The course crosses the rough Gulf Stream and is mostly out of the range of rescue helicopters, and Bermuda is guarded by a dangerous reef. The race is nicknamed “the thrash to the Onion Patch” because most Bermuda Races include high winds and big waves (a combination sailors call “a hard thrash”), and because Bermuda is an agricultural island.

An interesting piece of information from the Newport to Bermuda website (www.bermudarace.com): The very first Bermuda Race was an act of rebellion. In 1906, the establishment believed that it would be insane for amateur sailors to race offshore in boats under 80 feet. Thomas Fleming Day, the feisty editor of The Rudder magazine, vehemently disagreed, insisting, “The danger of the sea for generations has been preached by the ignorant.” Certain that an ocean race would be enjoyable and safe—and also develop better sailors and better boats—Day founded one on his own. The Brooklyn Yacht Club started the race in New York Bay, and down on the island paradise, the Royal Bermuda Yacht Club finished it off St. David’s Head. And get this: Critics predicted disaster. It was rumored that funeral wreaths were delivered to the three boats (all under 40 feet) so the sailors would be prepared to make a decent burial at sea. Statistics today show that, two boats have been lost since 1906 (Adriana, fire 1932; Elda, grounding 1956) and one life lost.

While a quick look at the 2016 Newport to Bermuda Race entries doesn’t include a local boat, there may be some sailors who will race as crew. Our neighbor to the east, Oakcliff Sailing, has entered four boats, so we can have fun following them. The race begins in Newport on Friday, June 17, and finish times depend pretty much on the size of the boat. Those interested in following the actions: www.bermudarace.com.

For those of you who can’t grab a seat on one of the boats for this year’s race you can race with the teams vicariously by reading a wonderful book by John Rousmaniere called A Berth to Bermuda: 100 Years of the World’s Classic Ocean Race. Rousmanier, who wrote 22 books, including Fastnet, Force 10 (a truly exciting book), is a Bermuda Race veteran and explains the addiction of the Bermuda Race that keeps racers coming back for more. It must be the intrigue of amateur sailors in normal boats that draws thousands to this race. So get a copy of this book, enjoy the vicarious thrills and check out the website: www.bermuda race.com. You definitely won’t be disappointed. 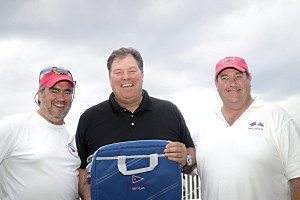