It was that one-time Port Washington dynamo, Marianne O’Neil, who talked me into going to the Port Washington/Manhasset Cancer Care’s first production of the Red Stocking Revue. That was more than 40 years ago. But one thing happened that night I remember vividly.

As Donna (the wife) and I sat there enjoying the show, impressed by the way some of Port’s talented amateurs were giving their all to achieve a professional performance, from the stage-left wings—without any fanfare—came a striking brunette in a black evening gown with a microphone in hand. Obviously, she was going to sing. And, man, did she. She had the presence of a star and a voice that was sort of a combination of Carmen McRae and Keely Smith. (McRae was a highly rated recording artist; Smith sang with Louis Prima.) I turned to Donna and said, “This gal is no amateur; she’s a ringer.” And indeed, she was. Professionally, she was Camille Carlyle. To us local folks, she was Port’s own Camille Corbisiero.

But, hey, I seem to be starting halfway through Camille’s saga. It starts with a fellow by the name of Peter Carlisi, who volunteered to become a U.S. Army paratrooper in WWII. His unit of the 11th Airborne was scheduled to jump into Japan—even though his company was warned that there would be an 80 percent loss of life. But the jump was canceled when it was decided to drop the A-bomb instead. Carlisi married a woman of German descent whose first name was Cecelia (Cecelia Carlisi, nice alliteration). Her mother was one of 11 children and her six brothers served in our Armed Forces. When Camille was born, Peter was overseas.

Back home after receiving his honorable discharge, with Cecelia and Camille in tow, Carlisi settled temporarily in a Canarsie-located Quonset hut. To make it livable, he—on his own—built a front porch. The press heard about it, found it newsworthy and took pictures, including Camille. “I was in the newspapers when I was 2,” she said. About a year later, the Carlisi family moved to a house of their own in the Pelham Bay area of the East Bronx. On the same block of Allerton Avenue, there were three other families related to each other. Said Camille, “I have 51 cousins.” She also had two younger siblings: Christine and Charles.

Camille lucked out when it came to fathers. Peter was a fine musician and an outstanding trumpet player. As they say, the apple doesn’t fall very far from the tree. Camille was a natural. She grew up surrounded by music, found her voice at a young age and never really stopped singing. She did everything aspiring singers do on their way to fame and fortune. She sang for free to hone her talent. But her first professional gig at age 17 was with her father’s band. When she sang harmony with him, everyone agreed it was a beautiful thing. “I was paid the grand sum of $25,” she said, smiling. “$25 or $25,000, it wouldn’t have made any difference.”

Camille’s next step was to acquire an agent. His name was Mark Rosenthal, who sat her down and told her seriously, “This is a very tough business. And if you’re not tough, get out now!” Obviously, Camille wasn’t frightened because she signed with a major talent agency, Ashley Famous, which led her to a contract with Columbia records.

One of Camille’s weekend singing jobs was at Ricardo’s in Queens. Ricardo’s was a family-owned club currently being run by Michael Corbisiero, son of the club’s founder. Although hitting on a female employee by management is frowned upon in the trade, Michael threw caution to the winds and flirted with Camille. He soon learned she wasn’t easy because it took him about a year to get a date with her. Eventually, they became an item and their relationship took a serious turn. 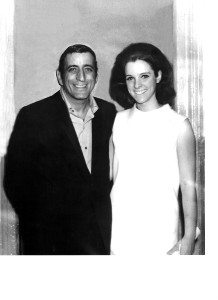 At the same time, Camille was booked to play a theater in Kansas City. So off to Kansas City she went. No sooner was she there than Michael was on the phone asking her to come home. Although he didn’t propose at that point, what he said to Camille must’ve been very convincing. She returned home, Michael proposed and Camille broke all her contracts. They were married at St. Patrick’s Cathedral with 800 guests looking on. The reception was (where else?) at Ricardo’s: 400 at a sit-down dinner and 400 at a buffet.

“I made the right choice,” Camille explained. “It would have been too difficult to raise a family in the big-time entertainment world.” She certainly has thrived in the world she did choose. Her father-in-law had purchased the 24-acre Thayer Estate in Sands Point, on which Camille and Michael built a house and raised Lecia, Michael and Cree—now 46, 43, and 35, respectively. After 20 years in Sands Point, they moved to Beacon Hill, where they’ve been for the past 25 years.

But that isn’t all. Camille went back to college, graduated and taught at Schreiber briefly before spending the next 23 years teaching at the Daly School. Her students loved her. And rightly so. There is so much about Camille Corbisiero that is admirable and impressive. Her take on life itself is right on. I wish I could go into it with you now, but I’m out of space. Well, maybe another time… 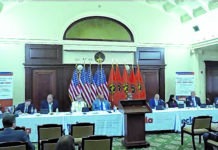 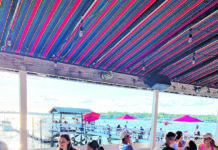 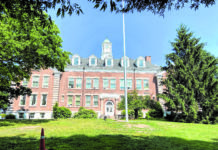