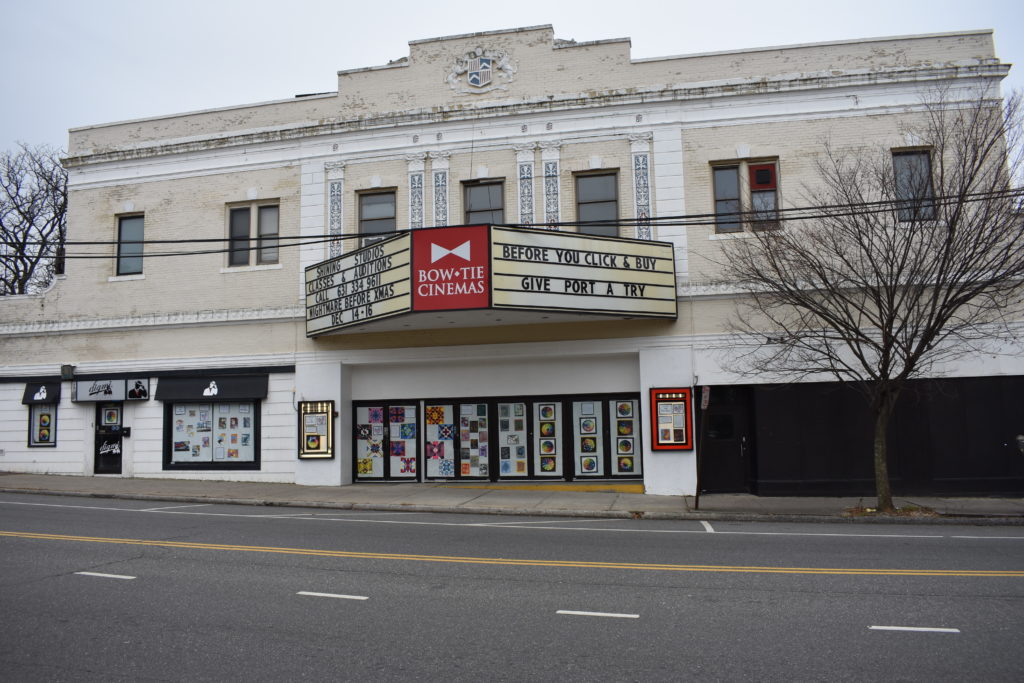 The building that previously housed the Bow Tie Cinemas at 116 Main St. has been in Iris Hami’s family since 1964. This was the theater in which Hami and her sister spent their weekends, watching films and eating popcorn; a place where the two grew up.

On Nov. 27, Hami took to the Port Washington News Facebook page to get the community’s input on what the Port community would like to see done with the building in the 2019 year.

“Is it an event/concert venue?” Hami asked. “Is it an indoor sports center? Is it a mix of retail and housing? Can it be part of the model block retail/mixed housing for young couples not yet ready to purchase a house? Or young seniors who no longer need a house but love Port and want to stay there?”

Since the Bow Tie Cinemas closed, many local nonprofits and businesses reached out to Hami to provide assistance. HEARTS Port Washington is currently utilizing the old theater’s windows for a pop-up art gallery, showcasing Port’s young artists, while the lobby was used for a fundraiser and the marquee currently promotes shopping local and Shining Studios.

“We’re enabling the community to use the windows or marque and fundraiser in the lobby to benefit the community while I do my due diligence for what is best from a business point of view on what would be the best use for the building,” said Hami when the Port Washington News reached out. “In the same light, it’s great to have feedback from the community on what they would like to see.”

Hami explained that she has been approached for mixed use, which she feels would revitalize the area.

“It would enhance the main street because they would shop and eat and it would have all their living needs in combination with that or event space or retail space,” said Hami. “Or it could be retail plus a movie theater plus community.”

Hami said that if the price were right, she would be open to someone purchasing the building, but if the numbers work with mixed use, then it would make sense to provide the downstairs to the community. Hami said she has had private meetings with the community and town and hopes to receive more input to move forward with a project in 2019.

“If the buyer, developer, community, town and everyone pull in to create something, I think it could be an amazing space for years,” said Hami. “I think it’s an important enough real estate. It would be a shame to put something there that in a few years would not be welcome or the community wouldn’t use and in few years, I’d have to start over again.”
Residents took to the comments to express what they would like to see in the empty building. Some suggested a roller skating rink or a bowling alley to provide a space for kids and teens to hang out.

“A combination of bowling alley or restaurant and event space,” said Alana Mitnick Benjamin, as an idea for the space. “We really don’t need more condos. Maybe Shining Studios or some of the other cultural organizations could use it as a space to rent.”

Others expressed a need for senior housing or the possibility of a venue like Paramount in Huntington and The Space in Westbury. But many residents seemed to agree that either the entirety or part of the building should be made into a cultural center and space for local nonprofits and performing arts centers to utilize.

“What about a movie/restaurant/performing space?” asked Katie Connorton Fogarty. “In Warren, VT, there is The Big Picture Movie theater. It houses a stand-alone restaurant and then two screens that show movies and you can order in food/drinks while watching movies. It’s super fun. Personally I think it might be hard to retrofit it as housing in the current space. There are barely any windows. Many industrial spaces that are converted to housing have ample and large windows.”

Hami explained the best way to give her input is on her Port Washington News Facebook page post.

What did you think should replace Bow Tie Cinemas? Share your thoughts with me by email at cclaus@antonmediagroup.com.