As a former candidate for Flower Hill Mayor whose main objective in running for office was to shed light on Flower Hill government, on December 1, 2020 I sent an email to Flower Hill Mayor Brian Herrington which requested “in the interests of transparency, [that] the Village … publicize that there are four (4) Trustee seats open” for the March 2021 election. Unfortunately, the Mayor ignored my request and never notified Village residents of this opportunity to engage in the democratic process, losing the chance at finding talented residents eager to volunteer their time in our Village. Instead, the four open Trustee seats are being sought unopposed by residents hand-picked by the Mayor and the Flower Hill party. As Mayor Herrington ran on a campaign of Transparency and Open Government, it is disappointing that he has not lived up to his promises. Perhaps most hypocritical is the Mayor’s recent boasting that he increased voting hours to make it easier for residents to vote – but what good is that when he contrives to ensure that Flower Hill residents have no choice at the ballot box?

After the “election” is over the new Board will get to work on the Flower Hill budget. The Board recently acknowledged that taxpayers in Flower Hill are overburdened by offering a resolution to defer required tax payments. Perhaps the Board should consider cutting expenses – Flower Hill’s payroll is one of the highest in Nassau County per capita considering the minimal services it provides (garbage pickup is not included as it is a contracted expense and not part of the Village salaries). When pension costs, healthcare and other perks such as employee cell phones are included, Flower Hill taxpayers shoulder a heavy tax burden for minimal services (how many Villages in Nassau County have a “Village Engineer” or a part-time Architect earning six figures?) Flower Hill residents only can hope that the budget process is conducted in a more open and transparent manner than the “election” and that some of the budget bloat gets cut. 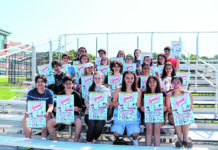