1-800-FLOWERS.COM, Inc., founded by Port Washington resident Jim McCann, has been named to the 2022 Fortune 1000 list.
It marks the company’s first year on this prestigious list, which ranks America’s most prominent organizations as measured by total revenue. Jim and his brother Chris have grown the company from its humble beginnings in 1976 to now being among America’s 1000 largest organizations, rooted right here on Long Island.

“We are honored to be named to the prestigious 2022 Fortune 1000 list. This reflects the dedication and hard work of our team members across the country,” said Jim McCann, Founder and Chairman of 1-800-FLOWERS.COM, Inc. “It is thrilling for me to see what began with a single flower shop transform into a multi-billion-dollar enterprise that is focused on inspiring our community of customers to give more, connect more and build more and better relationships.”
Jim bought and ran his first floral shop in Manhattan in 1976 with big ambitions. The store was initially named Flora Plenty, but after the company acquired the 1-800-Flowers phone number, the company was renamed.

In the 1990s, 1-800-FLOWERS.COM went digital and made its internet debut. The company launched on AOL as its first merchant partner and exclusive floral provider in 1994. Then in 1995, the company went live with its website, allowing the company to grow and expand the products offered.
Now, with Jim as chairman of the board, the company has grown into a unique e-commerce platform with more than a dozen gifting brands spanning gourmet food, personalized keepsake items, flora, and more.
In the last several years alone, the company has:
• Doubled the size of its business–with revenues exceeding $2 billion
• Doubled the size of its customer base. Since the start of the company’s current fiscal year, it has attracted nearly 4.2 million new customers.
• Grew its Celebrations Passport loyalty program to more than one million members. More than half a million new members have been added to the program since the start of the company’s current fiscal year.
• Added four new brands to its portfolio: Shari’s Berries, PersonalizationMall.com, Vital Choice, and Alice’s Table
1-800-FLOWERS.COM, Inc. is one of seven Long Island-based companies recognized on the Fortune 1000 list this year.
—Submitted by 1-800-FLOWERS.COM with additional reporting by Julie Prisco 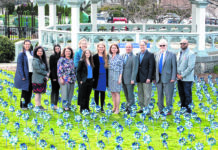 Pinwheels For Prevention In The Parks